The Jonas Brothers rang in 2020 with thousands of fans poolside at Fontainebleau Miami Beach on Tuesday night (Dec. 31), but more importantly, with their own leading ladies.

Just before midnight, Joe, Kevin and Nick were joined by their respective wives (Sophie Turner, Danielle Jonas and Priyanka Chopra, also known as the J Sisters) for the countdown to 2020 — and, of course, midnight kisses. 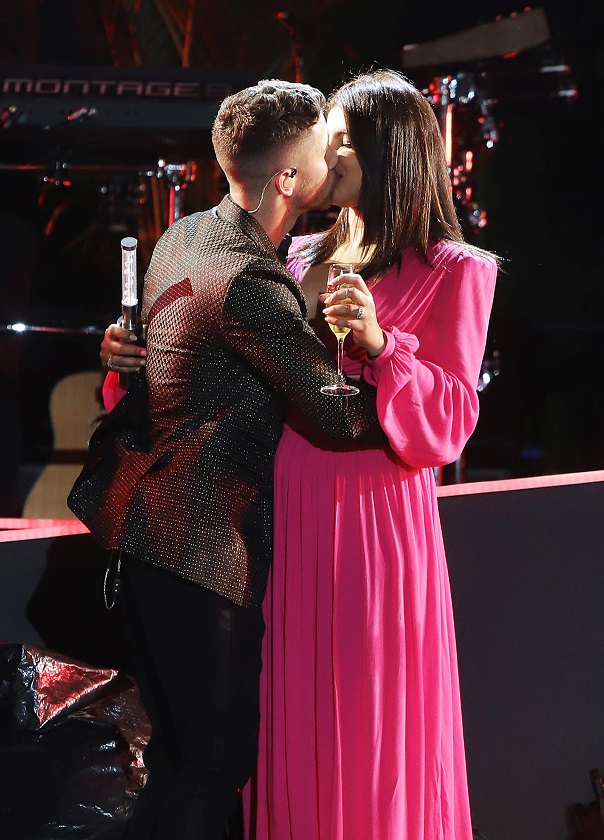 “Before we ring in this new year, and we get overly sentimental, let me just say thank you to each and every one of you for coming out and being here with us tonight at the Fontainebleau,” Nick told the crowd. “This is an absolutely incredible memory we’ll cherish for the rest of our lives, and a perfect way to ring in the New Year with a couple thousand of Miami’s best. Now, if it’s all right with you, we’re going to bring some people out that are very meaningful to us that we want to spend it with.”

The guys shared champagne toasts and kisses with their wives as fans screamed with excitement over the adorable moment, which was followed by a toast with the crowd. It didn’t take long for the Jonas Brothers to snap back into action, though, as they quickly resumed their show with an ironic, yet somehow fitting kickoff to 2020: “Year 3000.”

The JoBros performed an hour-long set, which included other hits and fan favorites like “S.O.S.” and “That’s Just the Way We Roll.” Their performances of “Only Human” and “Sucker” were broadcast live on Dick Clark’s New Year’s Rockin’ Eve with Ryan Seacrest — but the guys couldn’t not end their first set of 2020 with “Sucker,” so they sang it once more to close out perhaps the most epic kickoff to a New Year possible.

Watch the Jonas Brothers’ sweet New Year’s Eve moment with their wives below.

@jonasbrothers with their wives counting down to New Years! pic.twitter.com/hjK3P4VIVB