TWICE is currently one of the biggest K-pop girl groups in the world, but their 2015 debut song, “Like Ooh-Ahh” initially left the members of the group — Nayeon, Jeongyeon, Momo, Sana, Jihyo, Mina, Dahyun, Chaeyoung and Tzuyu — feeling like widespread success was an unattainable goal. In an interview with Cosmopolitan published Wednesday (July 6), Momo and Jihyo recalled feeling doubtful that TWICE would do well after the song failed to perform as they had hoped in the beginning.

“When we came out with ‘Like Ooh-Ahh,’ it didn’t do so well at first, so I didn’t think that we were ever going to get big,” Momo explained.

“‘Like Ooh-Ahh’ didn’t top the chart right away,” Jihyo added. “I had no expectations. I didn’t imagine our future.”

“Like Ooh-Ahh” saw modest success on the Billboard charts. The song hit No. 27 on the Billboard Japan Hot 100 and stayed on the chart for 36 weeks, while it enjoyed a higher charting position on World Digital Song Sales, peaking at No. 6 and staying on the chart for 11 weeks. “Like Ooh-Ahh” would later become a staple in TWICE’s catalogue, and has since racked up a over 450 million views on YouTube and over 91 million streams on Spotify.

In the time since “Like Ooh-Ahh,” TWICE’s star has been climbing stateside. The group’s two most recent albums — Taste of Love and Formula of Love: O + T= <3 — charted at Nos. 6 and 3, respectively, on the Billboard 200, and to support the releases, the K-pop group embarked on a series of stadium concerts in the United States. But such success comes at a price.

Speaking about the downsides of fame TWICE fans might not realize, Sana shared, “I’m really worried about my personal information leaking, especially at the airports. When I’m showing my passport, sometimes people are taking pictures from above.” Meanwhile, Jeongyeon told the magazine she gets “random calls these days on my cell phone,” and Jihyo and Tzuyu cited a lack of personal time.

For the time being, TWICE continues their hard work with one vision in mind, according to Tzuyu: “I want to be remembered as the legendary band of our time.” 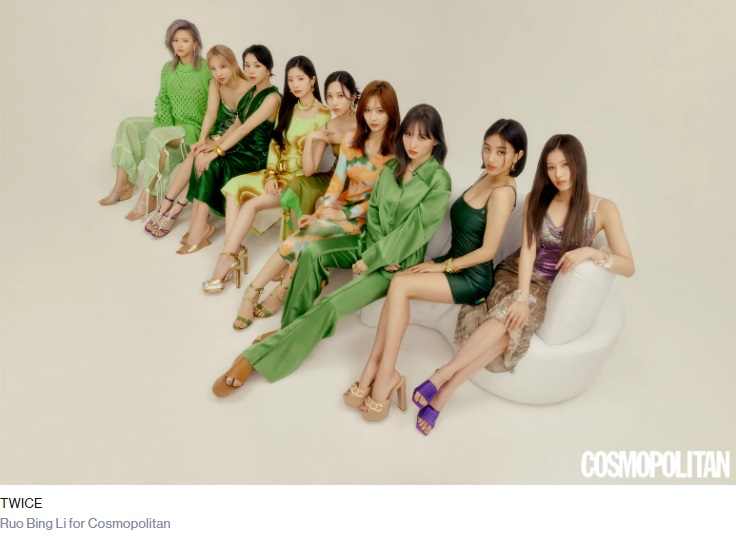