Selena Gomez took to social media on Friday morning (Nov. 15) to defend Taylor Swift in her ongoing battle with Scooter Braun and Scott Borchetta over the right to perform and use her back catalog of music.

In an impassioned statement posted to her Instagram Story, Gomez took a stand with Swift against the owners of her BFF’s former label, Big Machine Records.

“My heart is so heavy write now,” the superstar wrote. “It makes me sick and extremely angry. (I [don’t] mind if there may be retaliation) this is my opinion. It’s greed, manipulation and power. There is no heart or thought of anyone [else’s]. No respect for the words my friend has written since she was a 14 year old in her bedroom. You’ve robbed and crushed one of our best songwriters of our time an opportunity to celebrate all of her music with fans and the world.”

As previously reported, Swift posted a statement late Thursday night (Nov. 14), accusing Braun and Borchetta of refusing to allow her to perform any of the music from her first six albums — of which they own the masters — at this year’s American Music Awards, where she’s being honored as artist of the decade. (Braun and Borchetta have since denied they blocked Swift.)

Calling Swift “the most dedicated, fearless, [feisty], strongest woman I’ve [ever known],” Gomez went on to recount the moment she first heard her best friend’s breakthrough 2008 album Fearless prior to its release, citing the impact its songs had on millions of fans around the globe. She concluded the note by calling for the two executives to have a “change of heart” over the dispute.

“Seeing my best friend…be constantly pulled down is the worst feeling,” Gomez wrote. “Taylor fights. She will never stop fighting. People grow from choices. Some will stay exactly the same. I just want a change of heart.”

Read Gomez’s full statement in support of Swift below. 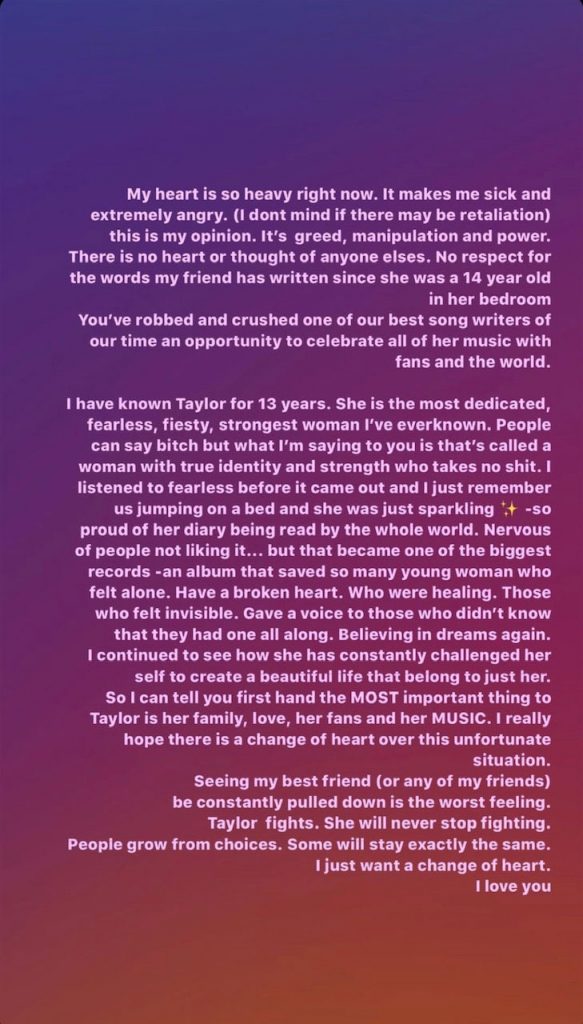