On Wednesday morning (Dec. 2), People unveiled its latest cover story with Selena Gomez, naming the superstar as one of the magazine’s four People of the Year.

During the interview, the superstar opened up about launching her cosmetics company, Rare Beauty, as an inclusive brand for fans and consumers of all backgrounds and skin colors.

“I don’t feel like Rare Beauty would have been [possible] three or four years ago,” she revealed. “I understand now how it feels to be on the other side, comparing myself or thinking I need to look more like this or more like that to fit in.”

Gomez continued, “It can take a toll on you, for sure. We’re not all a certain way, and we’re not meant to be…it’s fair to say that I am 1000 percent on the journey with the consumers. It’s not easy for everybody, and I want people to know they’re not alone.”

The singer’s other accomplishments and highlights in 2020 include releasing her third No. 1 album, Rare, using her Instagram account to amplify Black voices amid the Black Lives Matter movement over the summer and launching a Rare Beauty initiative to raise $100 million over the next decade to offer mental health resources in underserved communities.

Additionally, Gomez used her platform during the 2020 election cycle to encourage her fans to use their voices in the democratic process, and shared messages from the female leaders who helped inspire her to vote for the first time — from Vice President-elect Kamala Harris to Michelle Obama and Stacey Abrams.

“I’ve had a sliver of dealing with [racism] growing up, especially with my dad,” she revealed of her father, who is Mexican. “When it came to telling people to vote, I felt like it was my duty. Witnessing strong women who have walked journeys that I couldn’t imagine walking was such a pinch-me moment, and I’m just very grateful.”

The other recipients of People’s 2020 People of the Year distinction were George Clooney, Regina King and Dr. Anthony Fauci.

Check out more from Selena’s People of the Year cover story below. 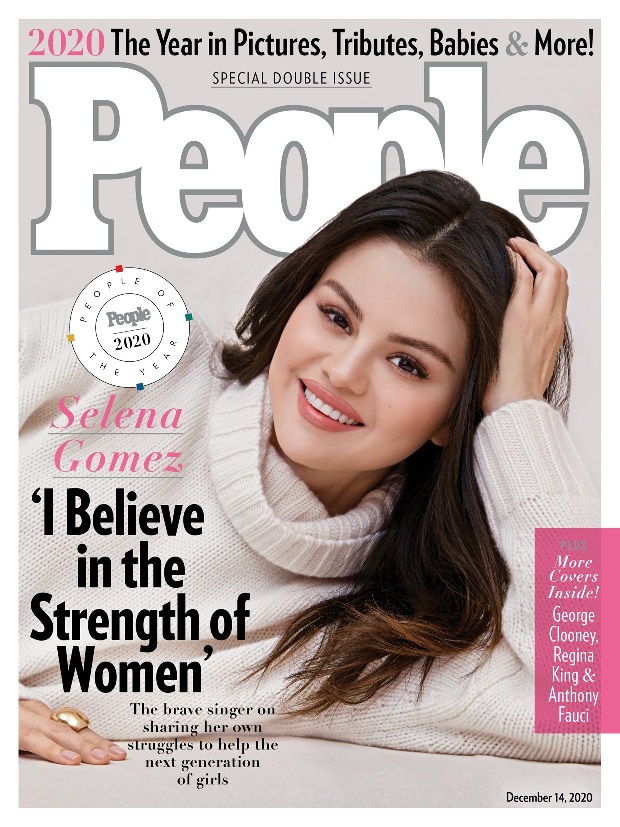