Bieber visited the LA County prison to meet with a group of inmates & learn about the maximum-security institution’s faith-based programs.

Bieber — who went to the prison in Lancaster, Calif., on March 23 along with his wife Hailey and pastor Judah Smith — visited with prisoners involved in The Urban Ministry Institute, as well as the Paws for Life K9 Rescue program, which allows prisoners to train dogs to become service animals for military vets. Thanks to conversations during his visit, Bieber committed to providing buses to transport family members who have been unable to visit their incarcerated loved ones during the COVID-19 pandemic.

“It was a life-changing experience that I will never forget,” Bieber said in a statement Thursday (April 1). “It was such an honor listening to their stories and seeing how strong their faith is.”

Bieber’s visit was in partnership with the Anti-Recidivism Coalition and ARC founder and One Community CEO Scott Budnick, who invited the pop star to come to the prison to learn more about the programs.

“After hearing Justin’s interviews around the release of his album Justice, and knowing how faith transformed his life, I was excited to invite him to Lancaster prison to meet deeply transformed men whose lives were saved in prison by the church,” Budnick said in a statement. “Justin came in with an open heart and incredible spirit and was so engaged in actively listening to the stories of change and redemption, as well as the men’s desire to expand the religious programming and give back to the community. Justin, Hailey and Judah had so many ideas after the visit and I received many collect calls from the men inside the prison afterwards expressing the joy the visit brought them after such a tough year.”

Fans can support the Anti-Recidivism Coalition and other causes close to Bieber’s heart — as well as enter for a chance to win concert tickets, a guitar signed by Justin, or Justice album merch — by visiting JB’s Propeller campaign. 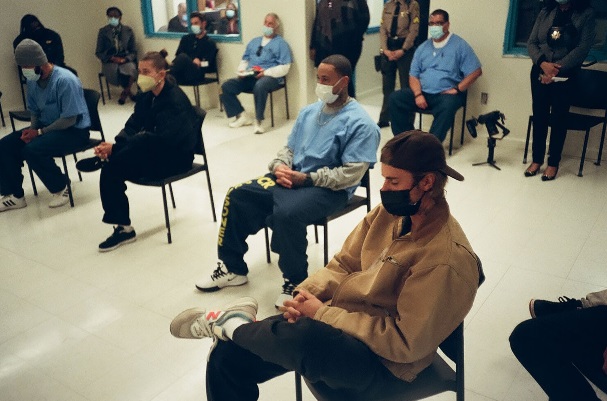