It could be said that Katy Perry sealed her fate for a Las Vegas Strip residency back in 2009 when she gave the world her single “Waking Up in Vegas” — an infectious addition to the city’s songbook.

The superstar’s well-laid destiny became a reality on Dec. 29 with the opening of Play at the freshly minted AEG Presents/Concerts West Resorts World Theatre in Las Vegas, where she left another unforgettable mark on the Strip in front of a sold-out, all-ages crowd of 5,000 loudly purring KatyCats.

Addressing the crowd, Perry welcomed the audience to Play noting that she is “not Celine Dion” — also a Resorts World headliner — and “if you are wondering if I am going to play your favorite song, I probably am.” A promise she fulfilled through and through.

Divided into five acts, plus an encore, the sensory explosion ignites with video narration from flamboyant ringleader Ricky T reminding the audience to keep those masks on with the battle cry, “It’s time to play.” 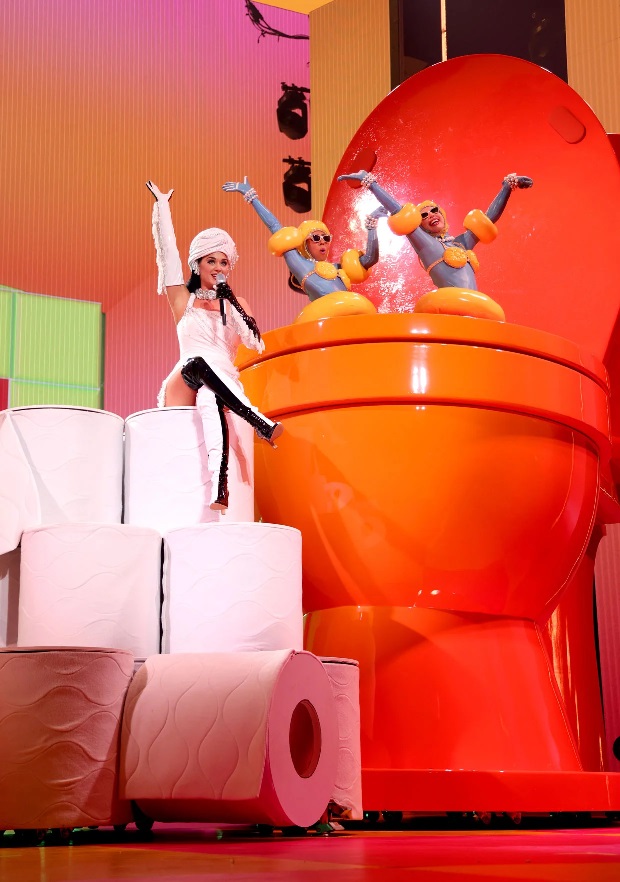 Across the theater’s panoramic screen, an animated intro displays a sea of Katy Dolls in a carnival vending machine. The video content was designed by Blink, who has worked with Bad Bunny, Camila Cabello and produced stunning visuals for the MTV VMAs. During this whimsical scene-setting moment, many of the touchstones from Perry’s career appear, including Kitty Purry and Left Shark. A little boy named Henry acquires a Katy Doll and down the proverbial rabbit hole we go into Perryland.

Throughout act one, entitled “Henry the Horror,” Perry assumes the persona of a Lilliputian queen of hearts with songs such as “E.T.” and “Chained to the Rhythm.” Dropped into Henry’s bedroom by a giant shadowy finger, she is chased by an electrical cord and gym socks while Walkie Talkies spring to step—everything is giant and alive. Perry climbs and rides an epic rocking horse during “Dark Horse,” popping her microphone into her cleavage for a few moments so she can get atop. Crayon-packed soldiers emerge toting hair combs.

In act two, known as “Flushed,” things take a turn as Katy Doll twists down the toilet bowl and into the bathroom of Henry the Horror. Perry trades her queen of hearts look for a mini-dress that resembles swaths of toilet paper and, of course, a toilet paper-style turban while climbing giant toilet paper rolls in an escapade with her friend Mr. Loo. This scene lays the ground for “California Gurls,” “Hot n Cold” and “Last Friday Night.” As Perry twerks on Mr. Loo, Mr. Poo emerges with whom she dialogues and then high-fives with a dancing plunger. Things take a cleaner turn as Perry does an onstage costume change in a giant bubble bath, transforming into a light-up dress for the ultimate crowd pleaser “Waking Up in Vegas,” simulating shaving her legs with an oversize pink razor and then licking the blade.

“If you think that’s stupid, then stick around,” she says as she bids Mr. Poo adieu with a flush.

Act three, “Eat Me,” an homage to Alice in Wonderland, is when the full psychedelia takes hold. Katy Doll has eaten all the mushrooms and a fungi ballerina paves the way for Perry to ride in, clad in latex chaps and a shroom hat, on an adorable snail while singing “Bon Appetit,” “Daisies” and “I Kissed a Girl.”

Acts four (“Trashun”) and five (“Perry Playland”) are when the trip peaks. In the former, highlights include a bit with a talking mask she finds in a trash heap—where she tells Mr. Masky, “maybe you are more famous than me now,” while wearing a dress made of beer cans. She then pops the tab on one of her “cans,” lactating beer into a glass while “Corona” jokes flow. “I need a second to hydrate, I am 37,” she says. Songs include “Lost,” “Part of Me,” Wide Awake,” “Never Really Over” and “Swish Swish.” A “Trashun” fashion show breaks out with an explosive catwalk showdown. Perry’s new song with Alesso, “When I’m Gone,” makes its onstage debut here. 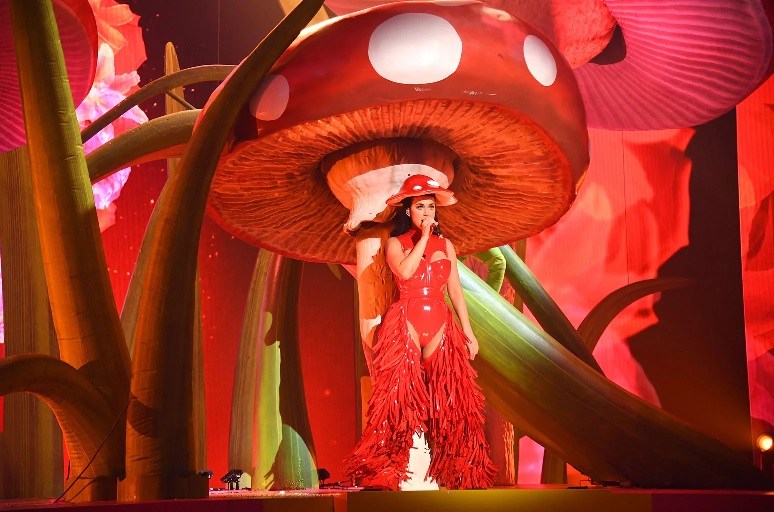 The show goes full Vegas during the final act, “Perry Playland,” where the pop star reminisces that both her grandma and aunt worked at the Stardust—the casino formerly on the site where Resorts World now sits—as a seamstress and a showgirl, respectively. After a full circle moment filled with glittering orange, yellow sequins and feathers, a parade of showgirls and showboys emerge with cupcakes, peppermints and other confectionary treats to the soundtrack of “Teenage Dream,” “Smile” and “Roar.”

In a surprising move for an encore, we see Katy through a keyhole as she attempts an ambitious cover of Whitney Houston’s “Greatest Love of All” and closes with “Firework” as heart-shaped confetti blankets the crowd.

Katy Perry’s Play continues with performances on New Year’s Eve and throughout January and March.