Harry Styles is taking the next natural step in his career: He’s dabbling in the beauty industry, much like his peers Ariana Grande, Billie Eilish and more. In an interview with Dazed magazine published on Monday (Nov. 15), the “Watermelon Sugar” singer opened up about his forthcoming beauty line, Pleasing, and also discussed his time in One Direction and how he’s grown since then.

While applying one of the products from the forthcoming line, titled the Pleasing Pen — an eye and lip serum that helps with tired-looking eyes — Styles revealed the idea for his beauty line will be kicking off with nail polishes.

“It’s starting with nail polish, because that was kind of the birth of what it was for,” the singer shared. “Me seeing a color on a flower or a wallpaper or something and thinking, ‘Oh, I wanna put that on my nails.’ It was a fun little project, but during the pandemic, and when we eventually named it Pleasing, it felt like it was so much more than nail polish. I’ve always found that the moments in my life which have brought me the most joy are the small ones, whether it be, you know, the end of the night under the stars or a bite of food, or sitting with your friends thinking, ‘Oh, I’m never gonna forget this.’ It’s always those moments that I find have the longest-lasting effect on me, in terms of sparking something wonderful in me. I really think that the essence of Pleasing is finding those little moments of joy and showing them to people.”

Styles’ Pleasing line will start off with a small launch and will release items piece by piece. Later on, fans can expect to see a Pearlescent Illuminating serum, Pleasing Pen Matte lip oil and Perfect Pearl nail polish, which the 27-year old promises to have as small of a carbon footprint as possible. Aside from putting out quality products into the world, Styles is hoping to foster a welcoming environment among his fans.

“I also think that what this can become is so much more than just products you can buy. I think it’s about giving, and giving back,” he added. “I am blessed to have fans who are so supportive of me, who believe in freedom and who have created this safe space for each other. Pleasing is really for them. That feeling of community is kind of what we would like Pleasing to (reflect).” 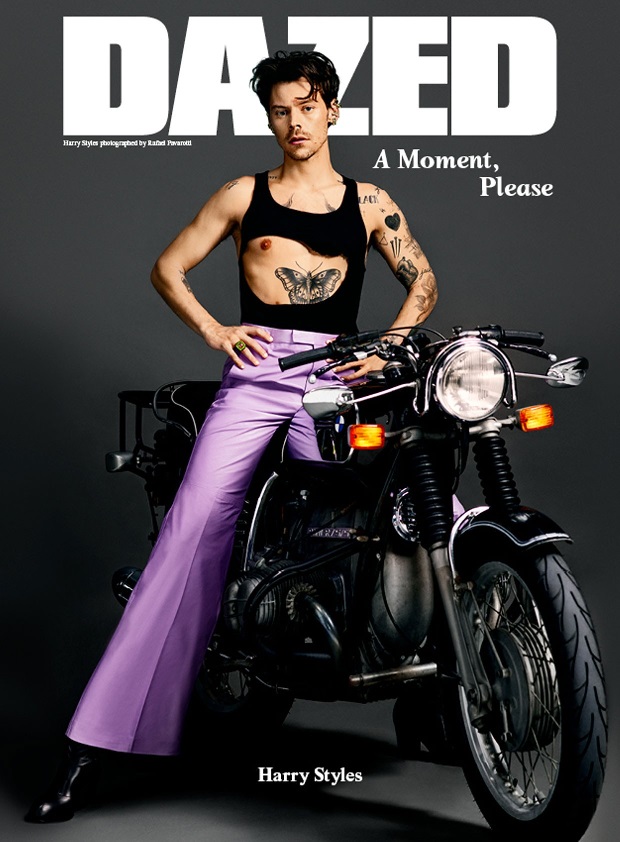 Rafael Pavarotti for Dazed
Harry Style on the cover of ‘Dazed.’

Speaking about his time in One Direction, Styles revealed that he was taken aback by the success the group was able to achieve so early on in their careers. “I was 16 [when One Direction started]. I just kind of finished school and didn’t really know what it was that was happening,” he explained. “Everything was really new and exciting and I didn’t know how long everything was gonna last. It kind of became like, ‘Whoa, how long can we keep this going?’ because I really didn’t expect any of this to happen.”

He continued, “There was a time when I was younger, and I was in the band, when I would have been afraid for everything to have stopped. I didn’t necessarily know who I was if I wasn’t in the band. Now, the idea of people going, ‘We don’t like your music any more, go away’ doesn’t scare me. I think there was a time when it did. It gives me the freedom to kind of go, ‘Great!’ I’m not working from a place of fear. I’m working from a place of wanting to work stuff out, and try different things.”

Styles’ most recent album, 2019’s Fine Line, hit No. 1 on the Billboard 200. The singer is currently promoting the album with his Love On Tour; the series of concert dates are set to wrap on Nov. 28 at UBS Arena in Belmont Park, N.Y.