The Foo Fighters frontman joined celebrity chefs Bruce Kalman, Duff Goldman, Antonia Lofaso and others for a pre-Christmas food-and-music event benefiting the Los Angeles Regional Food Bank.
By the time the first guests walked into the Eat, Drink and Support benefit at the Los Angeles Regional Food Bank, Dave Grohl had been making brisket, ribs and pulled pork for around 36 hours. Grohl spent the night before the Saturday event at the Food Bank’s downtown warehouse cooking meats to serve at his Backbeat BBQ pop-up — then sliced the brisket himself for the line of foodies that snaked through the venue.

In addition to the food, the 400 ticketholders were treated to sets by musicians Jessarae, Jessica Childress, and bands Foie Grock and Chevy Metal.

Kalman told The Hollywood Reporter that any time Harris calls him about a charity event he’ll try to make it work.

“As long as I’m available, I do it,” he said. “Giving back is really important and it feels really good and to have a voice and to be able to help people.”

In putting together this particular event, the short timeline just before the holidays meant a much more intimate affair than a 30-chef benefit.

“There’s so many moving parts to organize an event like this with sponsors and volunteers and permits and just so many things to do. You know, you can’t just set up a table and start serving food — as much as we’d like to.”

Lofaso echoed Kalman’s sentiment, adding that she’ll do as much as she can for her hometown.

Grohl’s BBQ lasted just an hour and a half into the event before running out, though he spent another half hour chatting up fans before joining Kalman and Food Network star Goldman’s band, Foie Grock, for a food-themed cover of Creedence Clearwater Revival’s “Fortunate Son.” (L.A.’s self-proclaimed “No. 1 chef-led alternative rock cover band” features Kalman on lead guitar and vocals and Goldman on bass.) Later, he joined Foo Fighters bandmate Taylor Hawkins in his “70s dirt rock cover band” Chevy Metal. (The band was also joined by Lisa Loeb, Nikki Sixx and even Hawkins’ 11-year-old son, Shane, who joined his dad for a cover of the Rolling Stones’ “Miss You.”)

Net proceeds from ticket sales went to the Food Bank, along with a $10,000 donation from the Wells Fargo Foundation; 2,664 pounds of pasta and sauce — almost 16,000 servings — from Barilla; and non-perishables donated by guests. Every $1 donated provides enough food for four meals to feed hungry children, seniors and families.

Kalman and Goldman both told THR that music has played as big a role as food in their lives.

“I’m a musician,” Kalman said. “I’ve been playing for a really long time and my dad was a music teacher. I had a rock band all through high school and into college.”

Said Goldman, “I actually started the bakery because I was trying to be a professional musician, so I was selling cakes to make money to pay rent and then the bakery kind of blew up.”

An event that could combine his two loves was a no-brainer — especially since it meant that he could get face time with “all the people that are eating our food or watching us on TV,” he said. “It’s really nice because usually when you’re filming you’re looking at a camera and … not seeing the people that [are around you]. So being able to meet everybody and you know, they give you high fives and they’ll be like, ‘You know, that last thing you judged, you totally got it wrong.’ I love that stuff — hanging out with everybody and then just meeting new friends.” 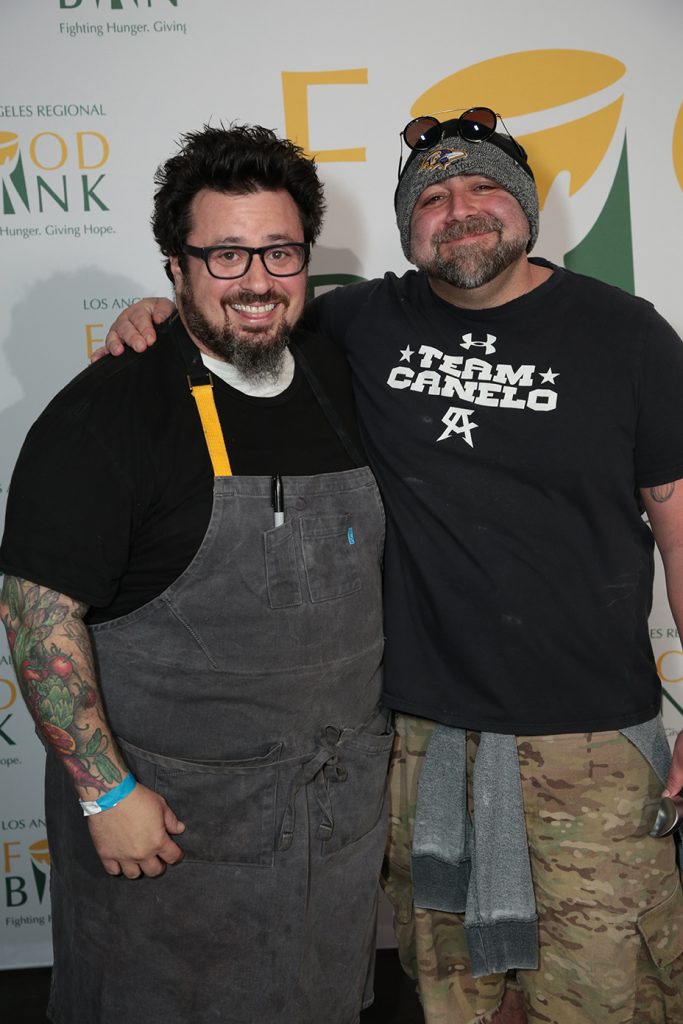