“Backstreet Boys: The Experience” includes music video fashions, fan photos & even a video booth to send messages straight to BSB: “A woman went in and proposed to Nick, so I mean, you can do whatever you want,” the exhibit’s curator says.

Backstreet Boys — the best-selling boy band ever (130 million records worldwide, to be exact) — are resonating as strongly with fans as they ever have, after 26 years in the music business. This year alone, the group released their 10th studio album, DNA, which debuted at No. 1 on the Billboard 200 chart. The album’s lead single “Don’t Go Breaking My Heart” — which hit the top 20 of Billboard’s Pop Songs airplay chart — was even nominated for pop duo/group performance at this year’s Grammy Awards.

To celebrate BSB’s larger-than-life (and ongoing) music career, the Grammy Museum has put together “Backstreet Boys: The Experience,” a brand-new exhibition that displays the boy band’s mementos, including childhood photos, school diplomas and wardrobe.

“It’s satisfying and exciting, because you work so hard after so many years. We never really expected it,” Backstreet Boys’ Nick Carter tells Billboard about the band’s longevity. “We don’t ever expect anything that’s been given to us or that happens to us. We’re just kind of living in the moment.”

The fashions on display at downtown LA’s Grammy Museum include all five members’ outfits from their “Quit Playing Games (With My Heart)” music video (which are now dry, following the famously rain-drenched shoot) and looks from their Unbreakable and Black and Blue tours. BSB handpicked all the memorabilia themselves, which catalogs their multi-decade career, filled with chart-topping hits, Grammys and dedicated fans.

“They’ve been accessible to fans since day one, and that’s something that’s continued on through today, and it’s going to continue on tomorrow — so that right there is what made this experience a no-brainer,” Grammy Museum curator Nicholas Vega tells Billboard of the reason behind the exhibit.

Even BSB supporters had a curatorial hand in the exhibition. The museum requested photos with the boys from BSB’s official fan club. More than 1,000 images from meet-and-greets, concerts and birthday parties were sent their way, many of which currently cover a 50-foot wall in the museum experience, Vega told Billboard.

Fans who did not make the wall can still interact with the boys through “immersive video” and interactive experiences like a booth where they can record a 30-second direct message to the boys, Vega told Billboard. “If you want to go in there and sing, you can. Full disclosure: A woman went in and proposed to Nick, so I mean, you can do whatever you want,” Vega tells Billboard. This is a way for fans to kind of give back and just talk to the Backstreet Boys.”

This exhibition is taking place ahead of the group’s biggest arena tour in 18 years The DNA World Tour, which begins May 11, and follows their successful Larger Than Life Las Vegas residency.

When asked about a favorite memory working on DNA, Carter recalls asking former Dancing With the Stars competitor, friend and fellow musician Andy Grammer to write a song for the record. That song would become “Passionate,” one of the group’s favorite songs on the album.

“[Grammer] just cranks out songs, and I knew he had something in there, and we all are huge fans of his. And when he brought this song ‘Passionate’ to the table, I played it for the guys and they all fell in love with it,” Carter told Billboard. “When [producers The Stereotypes] got involved, it was game over. At one point, we were stuck on a horn line — literally stuck on a pattern of a horn that we thought we wanted from the original demo — but the guys from Stereotypes were like, ‘No, this is the way it needs to be.’ Eventually we settled, and I was like, ‘Well, they’re The Stereotypes, so obviously, they are right.’”

BSB kicked off the exhibit with a Q&A session Monday night with some of their fans in the Museum’s Clive Davis Theater. KIIS-FM’s JoJo Wright led the conversation, which took fans through the backstreet of memory lane: from meeting their wives to their personal feelings toward former manager Lou Pearlman to inside stories of what really happened on the Backstreet Boys jet during their Black & Blue Tour. One story included bandmember AJ McLean attempting to fly the jet, fueled by a few shots of Jack Daniels and McDonald’s (which was served alongside gourmet chef preparations, specifically for McLean).

“Are you sure it wasn’t when he let me fly the plane?” McLean asked Wright (whom they’ve dubbed BSB’s unofficial band member) about the craziest thing one of the plane’s former Air Force One pilots had ever experienced.

“We’re sitting there at one point, I hear, ‘This is your captain AJ speaking,’ and I thought, ‘There is no way he is going to fly this plane,’” Wright recalled. Once he felt the plane jerk, his suspicions were confirmed, he said.

Most boy bands tend to break up and go solo, but Carter tells Billboard that it’s the band’s family dynamic that has kept them together and relevant all these years.

“We all had grown up together,” Carter says. “I mean, I’ve known the guys since I was 12, 13 years old. We know each other inside and out, and that has created a bond and family dynamic. We stick together through thick and thin, love each other and trust each other. I’ve been able to learn so much from them and apply that to my family dynamic, and with my son.”

And as Wright mentioned Monday night, a Backstreet Boys second generation may be well on its way. “We’re able to bring our kids around each other, and some of the kids are starting to want to sing, like Brian’s son,” Carter tells Billboard. “It’s awesome and we’re all just supporting whatever our children want to do, and we’ll support each other’s children.”

Fans can experience the exhibition starting Wednesday at the Grammy Museum through September. 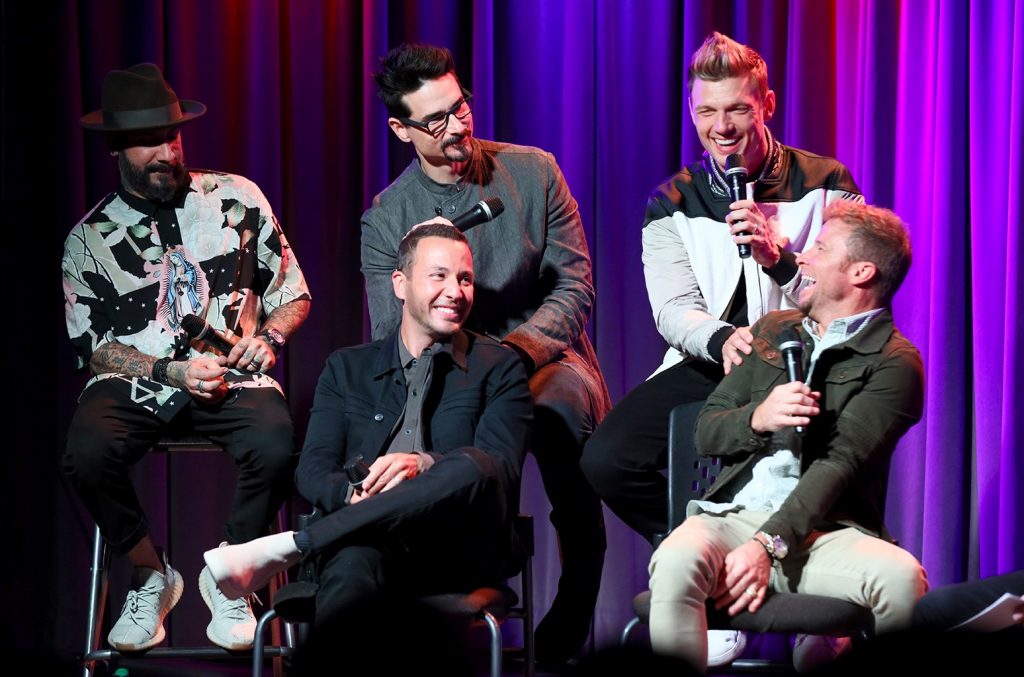