The figure is now on display at the ICON Park attraction in Orlando, Florida, where guests get up close and take pictures with the statue in the music room, where she stands in a luxurious scene inspired by her “7 Rings” music video.

Grande’s wax figure has her signature ponytail and winged liner, complete with a pink outfit inspired by her looks during the Sweetener tour — with her tattoos, of course, on full display. 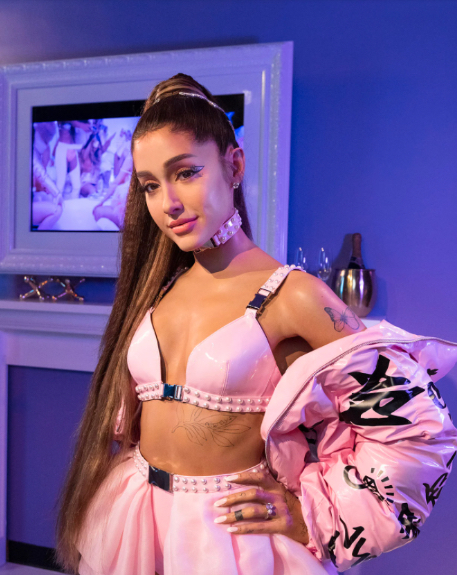 According to a release received by Florida’s WFTV9, a team of studio artists, sculptors and designers in London came together and researched images, videos, magazines and merchandise for six months to capture Grande’s exact likeness for the figure.

Grande has been enjoying married life lately with husband Dalton Gomez, most recently sharing a rare Instagram post of the couple on February 16. The 28-year-old “Positions” singer not only uploaded a photo of her posing with her arms wrapped around Gomez, but shared a quick video of them kissing as well.

In the snap, two-time Grammy winner is seen wearing a sleek black dress, matching stilettos and her signature ponytail while Gomez — in a stylish gray suit — looks down adoringly at her. In the next slide is the video clip, which shows the pair sharing a sweet smooch as a camera flash goes off.

The Voice coach married Gomez, a luxury real estate agent, in May 2021, commemorating the big event with photos on Instagram. The pair’s whirlwind relationship began back in 2020, and they confirmed their romance through a quick appearance in the music video for Grande and Justin Bieber’s “Stuck With U.”